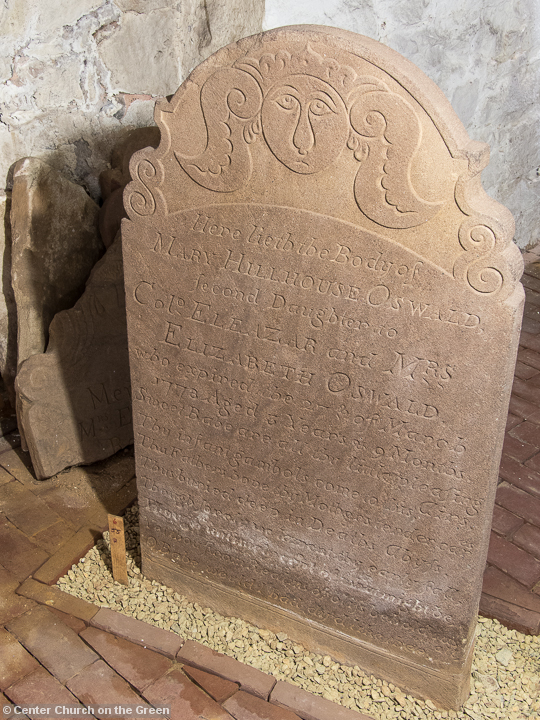 The second daughter of Colonel Eleazar (1755-1795) and Elizabeth (Holt) Oswald.  Eleazar was in the Second Company Governor’s Foot Guard, organized on March 2, 1775.  He answered the Lexington alarm and marched to Boston with Captain Benedict Arnold and went on to Fort Ticonderoga and Crown Point, and again on the Quebec expedition.  He was a native of Great Britain and and was living in New Haven in 1774 when he assisted in forming the Foot Guard.  He was subsequently appointed Lieut. Colonel of Lamb’s artillery and aided in recruiting for Connecticut’s quota.  In his letters, he mentions his wife and child.  In 1770, they were in Farmington, CT.  During the summer of 1777, he reported to Peekskill.  He resigned after the Battle of Monmouth in 1778–the year Mary died.

The fully legible portion of the inscribed verse reads:

Sweet Babe, are all thy winsome pleasing airs
Thy infant gambols come to this
Thy Father’s hope, thy Mother’s tender cares
Thus buried deep in deaths abyss
Though sorely we lament thy early fall
Though untimely ceopt of what might be.