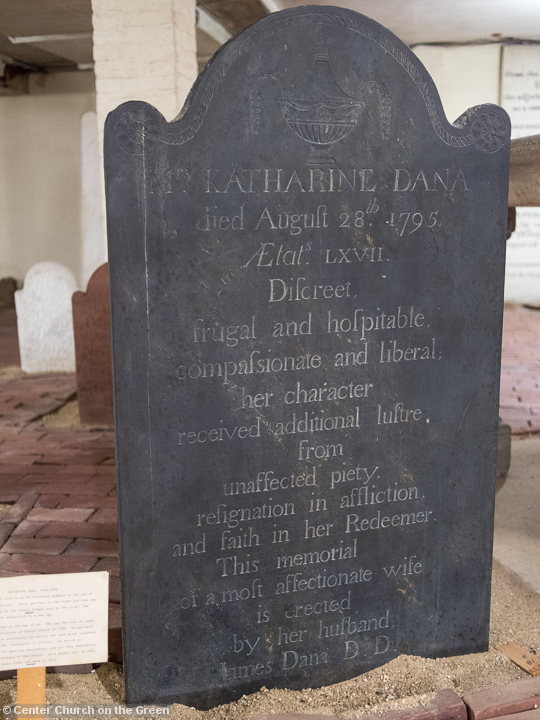 Daughter of the Reverend Samuel and Sarah (Chauncey) Whittelsey, and sister to Rev. Chauncey Whittelsey.  The first wife of the Rev. James Dana, D.D., who at the time of marriage was minister of First Congregational Church, Wallingford.  Center Church later voted him to be its pastor; he was inducted on April 29, 1789.  Dana was respected as a man of “great judgement and prudence in the management of affairs,” fearless in judgement in performing his duties, and of “eminent public usefulness.”  However, younger members of the congregation, fired up after the trials of the Revolution, thought him dull.

Consequently, he was dismissed in 1805 and the dynamic young Moses Stuart was engaged.  Dana’s feelings were hurt, causing his withdrawal from services at the church until six years later when the congregation formally beseeched him to return.  Thereafter, he attended every Sunday until his death in 1812 at age 77.

Before her marriage to Rev. Dana, Katherine was the widow of James Rice.

Katherine’s tombstone is remarkable for the depiction of a cinerary urn with willow branches carved above the epitaph.  The “urn and willow” imagery was not common in New England until the late 1700’s; only angel and death’s heads appear on the other embellished stones in the crypt, with the exception of one winged hourglass, and one sundial.